photos by: the author

It’s an all-too common story; guy buys car, guy builds car, life happens, guy sells car. We see it everyday. More often than not, though, guy buys another car and things get crazy. It’s exactly what happened to Terry Eshman, when he picked up his 2016 Mustang GT Performance Pack.

He started out with a brand-new, bone stock example in Competition Orange, that he found online out of a dealership in Roanoke, Virginia. Terry was so adamant about finding one in this particular color and drivetrain combination, that once he had, he and his wife made the purchase that day, without hesitation.

Secretly knowing that he wouldn’t be content with a stock Mustang, Terry’s wife was hoping that a catback exhaust would be the one and only modification to the car. Yeah, that didn’t happen. Instead, one thing led to another and Terry’s Mustang would ultimately be the low 9-second land missile that it is today.

But it wasn’t an overnight achievement — there were quite a few steps along the way that put Terry there. 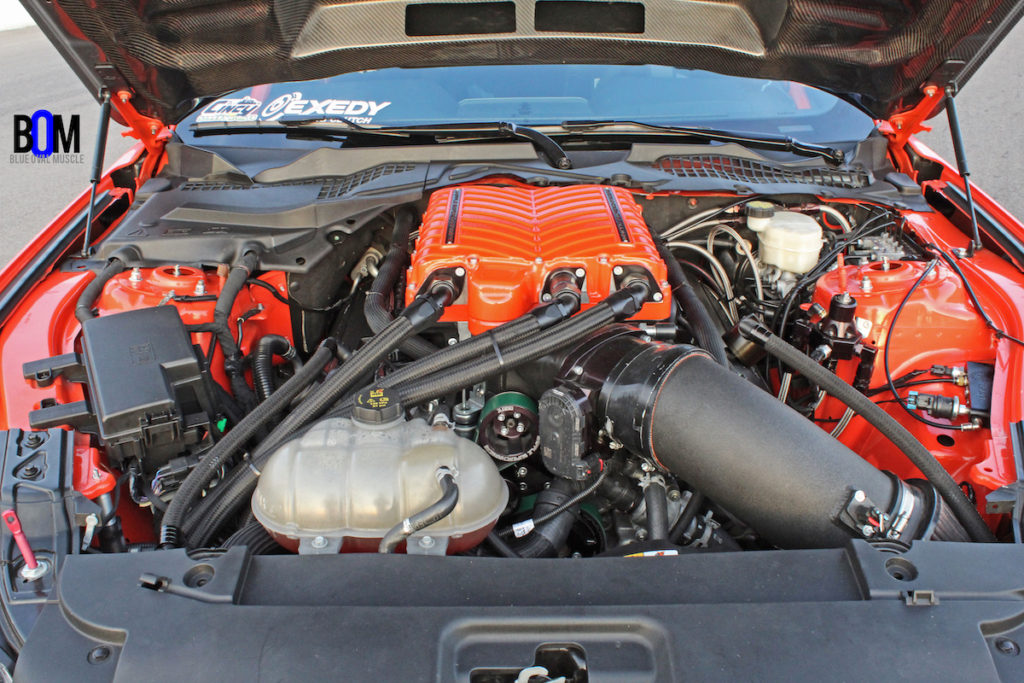 Initially, the Mustang would remain an all-motor car, using fairly basic bolt-ons that would put the GT into the low 11-second E.T. bracket. This included 4.09 gears, American Racing long-tube headers, X-pipe, exhaust and of course, tuning. This was also achieved while using a Tremec Magnum XL manual transmission.

Other upgrades were made along the way as well, including ported stock heads from BES Racing Engines, and a set of COMP Cams Stage 3 bumpsticks. A set of Ross slugs went into the bottom end, bolted to Molnar connecting rods. There’s no question that the Coyote is a strong and stout piece from the factory, but Terry took precautionary maintenance to plan for what was ahead. he credits BES Racing Engines for the engine assembly.

Looking to balance out the air/fuel delivery, a trio of Fore Innovations fuel pumps and a Fore regulator went into the mix, as did eight 1700cc injectors. Such upgrades would be needed, as a Whipple Superchargers GEN-5 Cobra Jet blower would be mounted on top of the Coyote. It’s fed oxygen through a K&N air filter with 6-inch diameter Rarefab intake tube, and a Whipple 150mm throttle body. 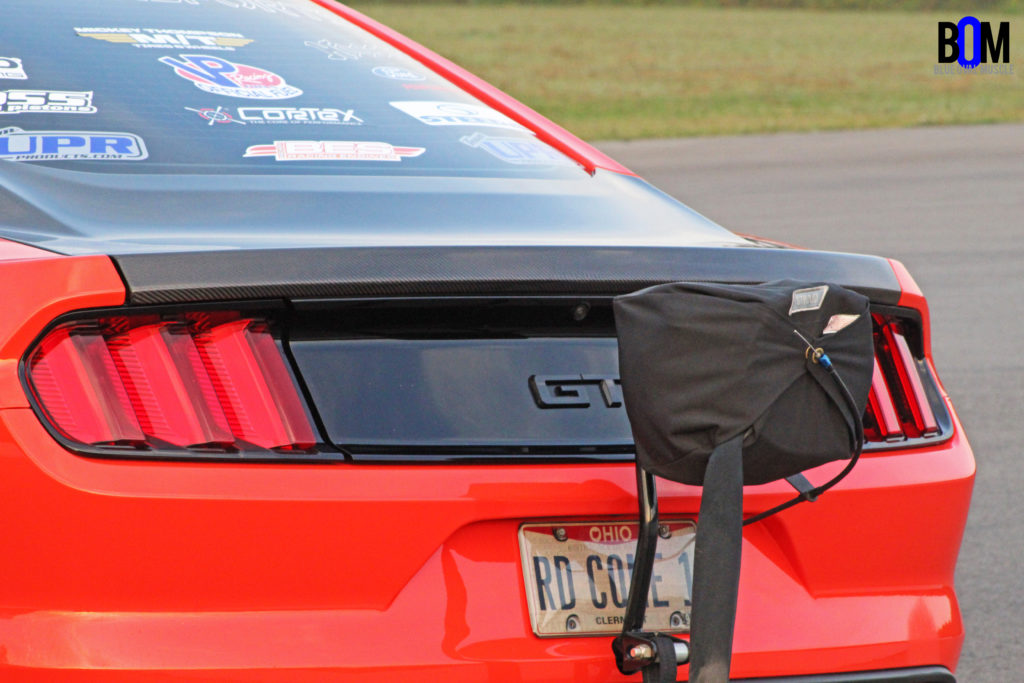 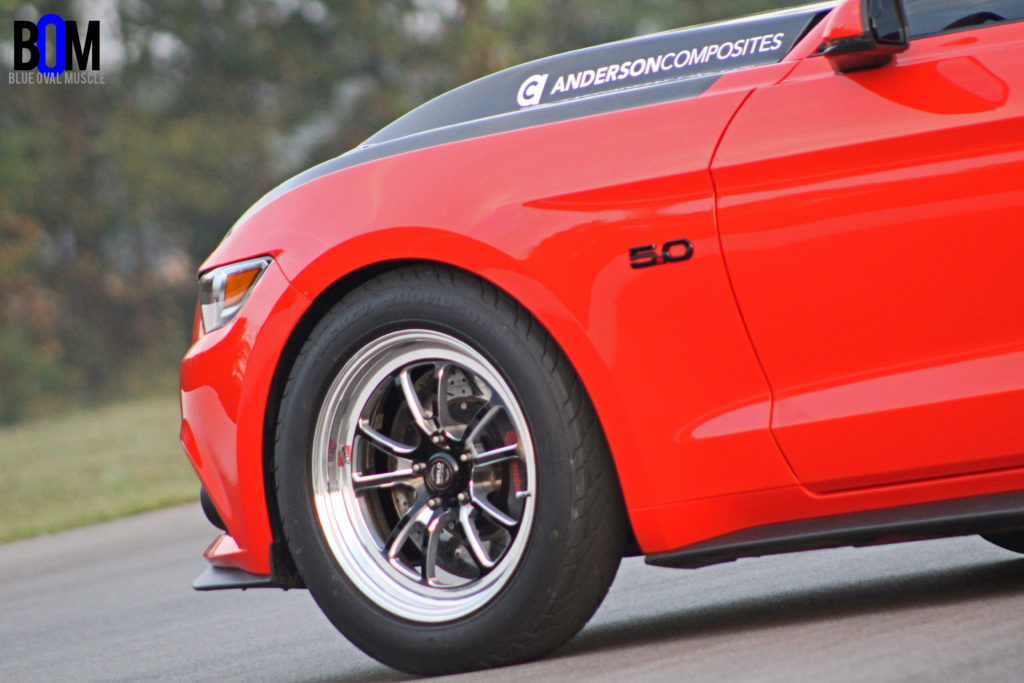 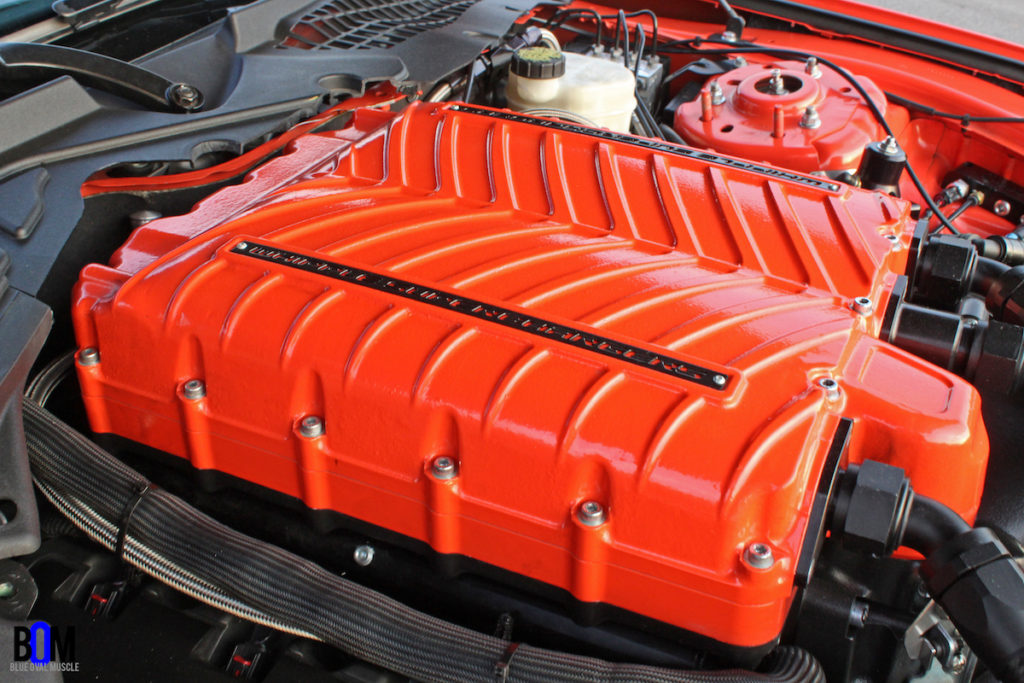 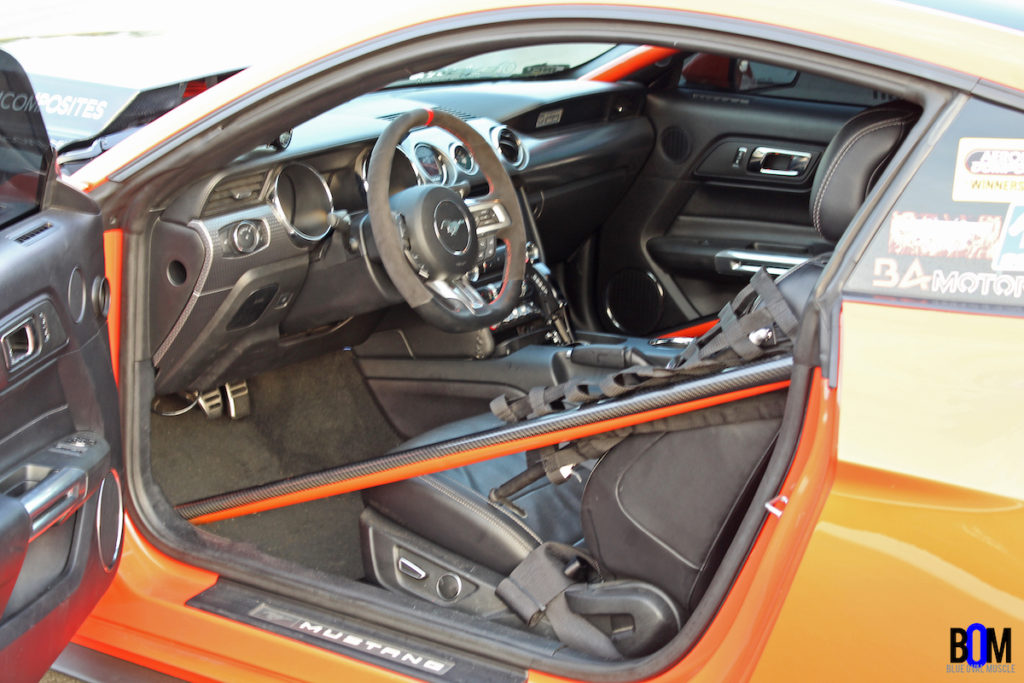 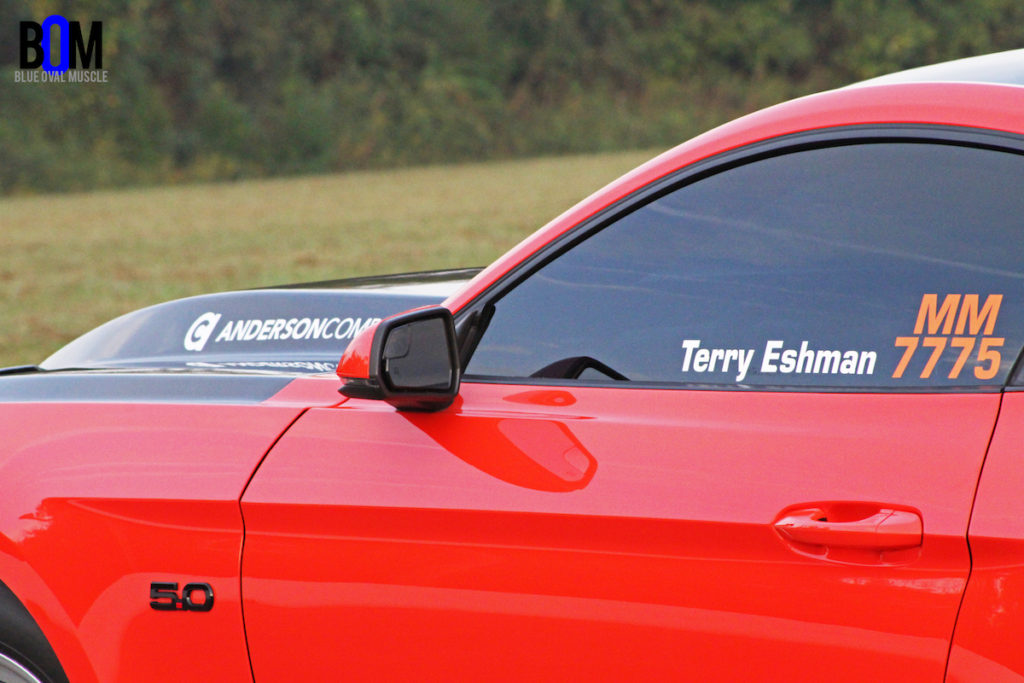 Cranking out between 18-26 psi. of boost, depending on which pulley is installed that day, the total output is 1210 horsepower and 885 lb-ft of torque. A Whipple air-to-water intercooler, with a Tig Vision ice tank and high-flow EMPpump mounted in the truck, help keep things cool.

With Terry at the helm of the EMS Stinger standalone ECU, tuning is entirely in his hands, literally. The current best ET is a 9.0 at 159.24 mph — but we’re not quite done breaking down the mods, yet.

Sitting behind the blown cammer is a TH400, built by JPC/Transmission Specialists. It’s sporting a Hurst Outlaw shifter for more precise shifts and a B&M cooler for longevity. The torque converter is a Transmission Specialties Super 9-inch bolt-together unit, of an unspecified stall speed. A carbon fiber driveshaft connects the gearbox to the rear axle, while a JPC loop ensures that if it ever fails, the damage will be minimal. 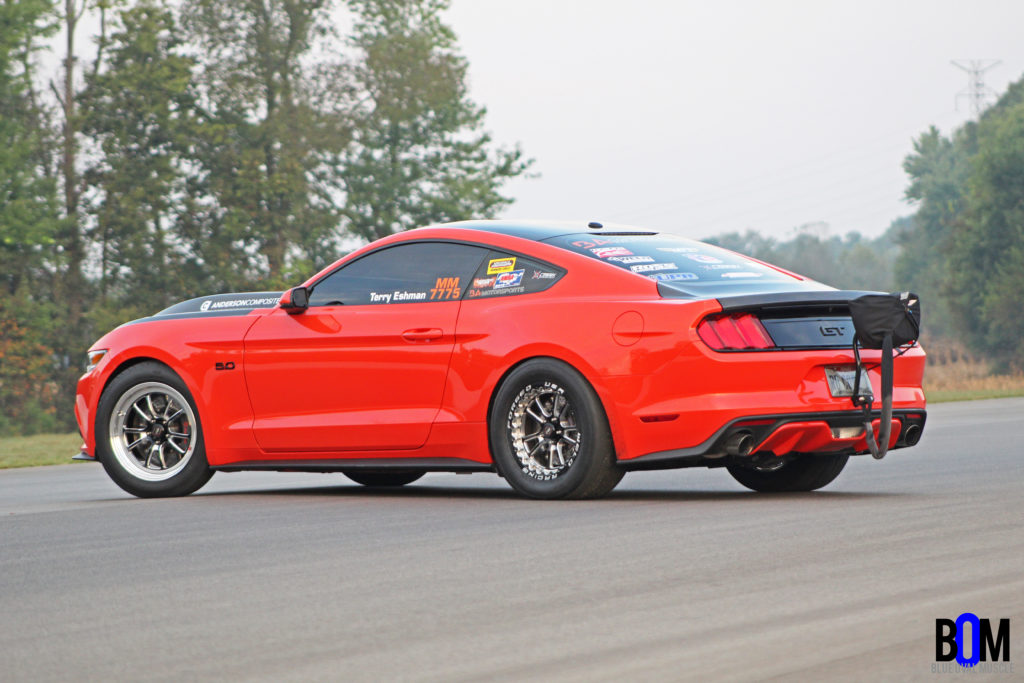 Out back, are the same 4.09 gears and Torsen spool that lived in the car when it was still running 11s, naturally-aspirated, but the plan is to swap out to a much more manageable 3.55 gear set. Driveshaft Shop 1200hp capable axles replace the stockers, too. The suspension has been brought up to speed a bit, with the help of Steeda front and rear springs, upper and lower control arms, IRS braces and bushings.

Viking Crusader shocks live out back with the aid of traction in mind, while stockers are still up front. Viking coil-overs are on order as we type this, however, with the OEM front upper and lower control arms still in tact. Underneath the car, you’ll also notice the Baer Eradispeed rotors with the factory brake calipers at all four corners. 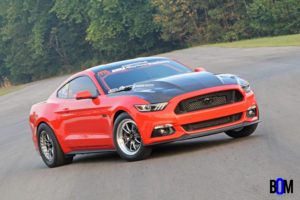 The big brakes are needed when you’re clocking nearly 160mph through the speed traps, bit in order to get there, you need the right rolling stock. On Terry’s Mustang, are a set of Weld Racing S70 wheels; 18-inch diameter in the front to clear the brakes, 17-inch beadlocked in the rear to help with traction. They’re wrapped in Mickey Thompson rubber at all four corners.

Body mods are fairly minimal, but in order to shave some weight and add a touch of curb appeal, Anderson Composites 4-inch cowl hood and rear deckled went on the car.  A Stroud parachute helps bring the car to a halt in a hurry.

On the inside, a 10-point Cortex Racing roll bar keeps Terry safe in the event of a crash, while adding some additional chassis rigidity to the car, overall. Also in the cockpit, you’ll find an AEM transmission gauge and a MSD shift light.

All of this adds up to one impressive car that any Ford enthusiast wold be proud to own. We caught up with Terry, his car and his car builder/crew chief, Brandon Alsept of BA Motorsports, at the 2019 Holley Ford Festival and NMRA World Finals in Bowling Green, Kentucky.

Terry also tells us that this car wouldn’t have been possible without his friends and sponsors at Whipple Superchargers, Cortex Racing, Anderson Composites, Steeda, Finish Line Performance, Ken Bjonnes and Rob Shoemaker at Palm Beach Dyno and UPR — for the much-needed catch can.

There’s more planned for the Mustang over the course of the off-season,  so we’ll be sure to catch up with Terry next year to see how things turn out.