At drag strips across the country, it is not uncommon to see many Fox body Mustangs tearing up the track. Its light stature and large engine compartment allows for a perfect starting point and many racers have taken advantage of this incredible platform.

Dave Ginter of Nashville, Tennessee is one of those drag racers. His first street car was a Fox body and was responsible for turning him into a life-long Ford enthusiast. After a day at the track with said Fox body, he set out to build a dedicated track car. He has been participating in NMRA events for almost a decade now.

He recently showed up at the Holley Ford Fest, an event that spotlights anything and everything powered by a Ford engine, with his 1987 Ford Mustang. It is powered by a 5.4-liter Modular motor built by AES Racing out of Chicago. The Precision turbocharged engine is backed by a turbo-400 transmission that feeds into a Team Z rear-end. Ginter also turned to Team Z for the suspension as well. The chassis was built by Scott Black at Chassis Pro.

While it is unclear from the video what exact role they played in the build of this car, Tobiner Motorsports and SpeedCraft are also credited by Ginter for helping to get the car ready for the track. Matt Bell handled the base tune for the car which is controlled by Holley electronics. In the video, Ginter praises the Holley electronics for its ease of use saying: “ I’m definitely not a seasoned tuner by any means but I like it. I think it’s really user friendly.”

Ginter was one of many to attend the Holley Ford Fest with the goal of dialing in their car for next year’s NMRA schedule. It will be interesting to see what kind of changes he makes to the car  over the winter and we hope to see him and this impressive 1987 Ford Mustang competing next year. 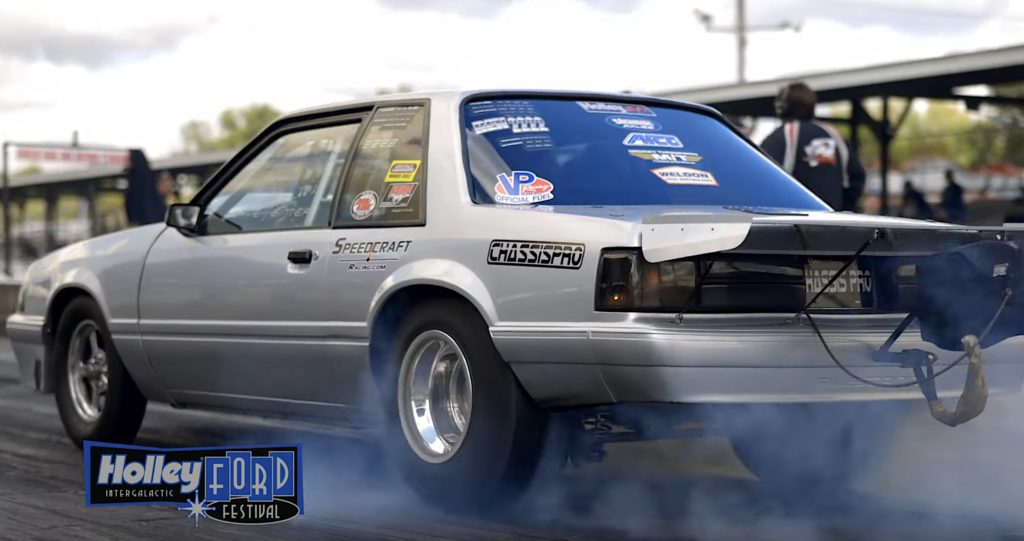